The Bellwether Syndicate with Then Come Silence

The Bellwether Syndicate with Then Come Silence

Tickets refund requests must be received 24 hours before doors open. 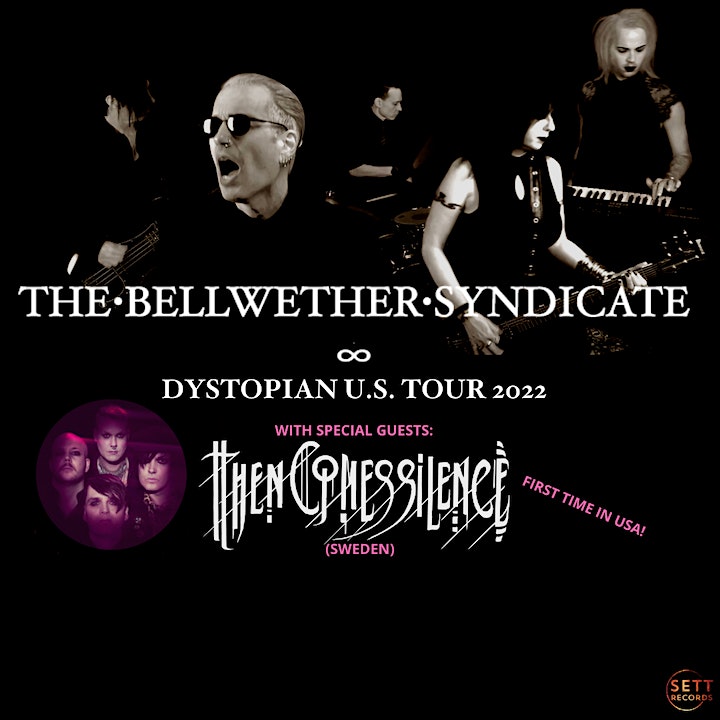 A Chronicle of Outrage

In a time of universal deceit, telling the truth is a revolutionary act. – George Orwell

Formed in 2012, THE BELLWETHER SYNDICATE is fronted by veteran artist William Faith

(keyboards/percussion) and Stevyn Grey (drums). The band have always sought to color

outside of prescribed genre lines, endeavoring to push past the boundaries of style into

something substantial and vital.

Released in 2013, The Night Watch EP was supported by a string of dates both domestic and

abroad, culminating in the band delivering a celebrated performance at Germany’s storied

Released in 2018 (as a single from the forthcoming album), Republik is an alluring piece of glam

noir, fusing a raw, swing groove with William’s crooned vocal, itself a lyrical lamentation of the

erosion of communication between people in this troubled era, while Sarah’s liquid guitars

gently sweeten the delivery before the song gives way to an instantly-memorable, anthemic

chorus, bursting with glam rock guitar and tribal drums, as the timely lyric

Then Comes Silence are the Swedish captains of postpunk. The quartet from Stockholm is a

fresh breeze of gothic renaissance, kicking darkness around with hammering rhythms and

melodies that make hearts melt and blood freeze. The fascination for doom and darkness

pervade and influence every tune and word.

shadows of goth-gaze and into scraps of coal hearted psych. The sharp soundscape is intense,

massive and pounding. The lyrics flirt with death and sorrow. It’s goth, psychedelica, rock and

post-punk in a symbiosis. Since the band’s very first show, as the opening act for A Place to Bury

propelled either side of the drum and bass lead, like a dark and winged creature. Sinister and

threatening vocals set up a presence that is both exciting and foreboding. Adrenaline

guaranteed! Their music attracts wide attention and is praised for its apocalyptic sound and

more frequently a part of the line-up on the festivals in Europe. The same year, Seth Kapadia

Norte) became the new members in the band.